Difference between revisions of "Slave positions"

Slave positions are ritual body posings that incorporate some level of mental bondage.

Various positions for the slave such as attention, parade rest, kneeling and worship positions are most common yet may vary in implementation. 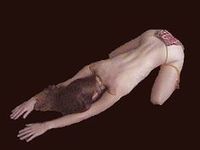