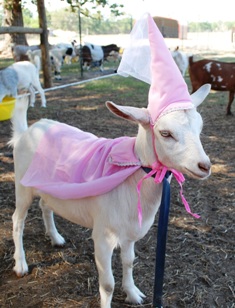 Goat week is an ancient tradition on Fetlife.com that occurs annually on April 23-30 where in which all users customarily place crazy pictures of goats as their avatars.

The practice stems back to the 1830's on Fetlife[1] where in which a single man was said to upload a picture of a goat god known as Pan wearing a denim suit and sporting a clown nose and mohawk hair cut, though some critics argue the god pan wasn't invented until 1922. The tradition was said to be inspired by Percy Shelly's poem Ozymandias[2].

Goat week has been known to increase exposure of crazy goat pictures on fetlife during goat week by over 9000%.

During goat week many users of Fetlife.com will often post the following diatribe:

For too long crazy pictures of goats on FL have been suppressed and it's time we all stand up for what is right, for all that is required for evil to succeed is for good people to do nothing. Join us in our fight.

I am encouraging a nonsensical behavior of finding a crazy picture of a goat and making it your avatar for seven days.

GOAT AVATAR! DO IT BECAUSE REASONS!!!

Feel free to copy pasta the following as a status update:

In honor of international goat avatar on fetlife week, please consider finding a crazy goat picture and making it your avatar for the next seven days to support crazy pictures of goats everywhere.

It is important we stand united and bring attention to the serious issue of ridiculous pictures of goats.

WE STAND UNITED! WE WILL NOT BE SILENCED!!!

Goat Legion is the spontaneous effect that occurs during goat week of one's feed being suddenly flooded by pictures of goats rather than tits... Goat legion is known to spread due to a mixture of goat power and goat pressure.

Participants of Goat Week have been known to go on week long binges of posting goat memes and pics, hitting the love button on all goat pictures in their feed, and generally spreading Goat Mania, often posting videos of themselves screaming like goats or even party music such as GoatStep[3] and similar.

Religion of the Goat

While not all participants of goat week are zealots devoted to Goat Law, many do conform to historical treatises of the Goat Code and proselytize year round in hopes to raise Goat Awareness. Goat Cults have also been known to spring up, demanding "Ode to Goat" Ritual Sacrifices[4].

While not conclusive, many conspiracy theorists believe that GOAT WEEK has secret Illuminatti ties[5].

Goat week became a fetish back in 1776 when it was discovered that Salvador Dali had a secret pension for posting pictures of goats on fetlife[6].