Impact play is an SM practice in which one person (the bottom) is struck (usually repeatedly) by another person (the top) for the gratification of either or both parties. Extensive or high intensity impact play may be considered edge play.

For typical wood or leather style implements wielded by those of average strength on an average sized, healthy subject, any time the elbow executes a forceful momentum strike from a thirty degree angle or more one is said to be executing impact play. Variables might include the size and strength of the person topping and the type of implement used, for example, a large and strong person giving a spanking at the wrist might be executing impact play, while a smaller person wielding a metal police baton may inflict impact with a flick of a wrist. Typical strikes that are less than thirty degrees of force emitted at the elbow are often said to be sensation play.

The sensations produced by impact play depend on the area in which the impact is concentrated as well as the material of the tool. Typically, wide implements such as an open hand, paddle or flogger produce a dull "thuddy" sensation. Narrow implements such as a cane, riding crop, belt or single tail produce a sharp "stingy" sensation. There will be exceptions to this based upon the material of the striking implement.

Many have a preference for "sting" or "thud" and may prefer to start with one and move to another.

For safety, impact play should be done on areas of the human body well protected by fat or muscle; areas to strictly avoid include the kidneys, neck, tailbone, hipbones, collar bones, the head and all joints or areas where there is bone especially close to the skin.

The usual targets for flagellation are the buttocks and the two areas of the upper back below the shoulder blades. With care, the thighs, the backs of the calves and the chest can be targets as well. Breasts are another potential, but high-risk, target and should only be used with experience. 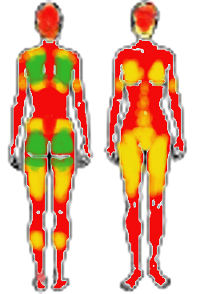 Improper technique can result in:

Even proper technique may result in:

Be aware of what effects impact play will have during a scene by knowing the levels of head space and be prepared to deal with aftercare and drop. Be aware that simple things such as use of hormone treatments, blood pressure medication, menstruation, iron deficiancies and similar can cause a much higher risk of leaving marks and that no impact play of any kind is completely risk free from leaving marks and sometimes bruises may arise days later when they were not present previously. Discuss the bottom's preferred methods of pain processing.

If you should decide to use implements in your play, remember to start low and slow to include your training with impact tools.

Secondly, practice your aim and distance obsessively before ever taking a tool to human flesh to ensure your control is such that you can finely gauge your impact intensity, speed and strike zone. If you can't control your tool with precision, do not use it on a human, practice instead on a dummy or pillow or similar until you can.

By starting slowly the top will see the skin slowly and lightly redden as the blood starts to rise to the surface, which will help increase tolerance and pleasure. Start with softer blows and work up gradually to harder ones–this way the bottom will be able to take more as well as get more out of the session. Similarly, if you have more than one implement, use the lighter one before going to the heavier one. In addition, varying the pace and alternating heavier blows with softer ones (or using just the tips), can make the difference between a good impact scene and a great one.

When using a whip or flogger the top must take great care to hit the intended target area, and avoid wrapping; that is when a whip or flogger makes contact with the target area somewhere up its length and the remaining length wraps around the bottom's body to deliver a sharp, non-erotic, and possibly injurious off-target blow, such as to the hipbones, ribs, or collar bones.

The longer the falls, the more skill is required by the top to land a "safe blow".

In some advanced cases wrapping may be negotiated and intentional.

Generally the bottom should be relatively relaxed if the top intends for them to enjoy the experience. During impact play the top needs to be aware of the nuances of how the bottom is handling the experience and when to vary the strokes. If the bottom tenses their body suddenly after receiving a stroke, the top may lower the intensity or frequency of the impact and then build back up to that momentum and force more gradually to ensure play remains enjoyable for both parties.

Advanced flogging techniques use a pair of floggers or whips (or other implement) employed in a martial arts style alternating pattern, a technique commonly referred to as "florentining" or "florentine flogging."

Florentine techniques, much like music, are often conducted on a four or six count beat known as an X beat weave, alternate counts exist however, but are rare and more often used for performance purposes than SM.

If you have music to accompany your scene consider using the music to move to during impact play. Bottoms will have to be conscious not to move too much so that strokes are missed by the top and tops will have to account for timing to have their strokes land on the beat as well as land accurately. This can produce a quasi-hypnotic effect during the scene for mutual scene enjoyment.

Check out some great impact tools in the paddles and slappers and floggers and whips areas in our store!

This category has only the following subcategory.

The following 5 pages are in this category, out of 5 total.